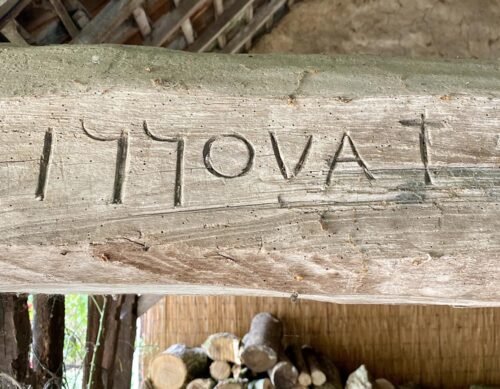 La Plonplonière is literally steeped in History. In another life, it was a former orchard numbered by the plot N°26 on the very first Napoleonian land registry of the 22nd Germinal year XIII (April 12th of 1805). A mister André Vainet, then Lord of Porte d’Aix and owner, most likely vowed that his memory be remembered forever and carved to that purpose 1770 VA ✝ in the wood of the main beam supporting the barn.

Nearly three centuries later, the very same barn, now attached to the main house, suffered through the passing of time while the beam made of elm wood remained as a witness of this long gone past to become the symbolic starting point of yet another adventure. An adventure envisioned this time by the current owner of the grounds, a mister Jean-Baptiste Aubert, very sensitive to this mysterious autograph that transcended times and very concerned about conveying the emotion he felt upon its discovery.

He made the wish that this barn last forever and took up the challenge of resurrecting it. Even though the beam is the testimony of old days’ fine work, it doesn’t play the role of underpinning any longer. Instead it was saved to honor this message of History and to give authenticity to the recently restored building, now housing four refined guest rooms.